Eternal Hell Belongs to the Gospel of Hope- A Response to Rob Bell’s “Love Wins” Part 2: Why Hell is Important 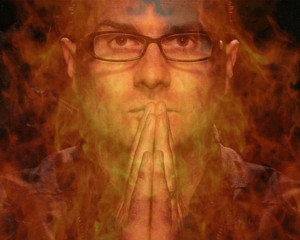 Is Hell a real place of eternal flames, or do we make our own hells on earth by refusing to believe God’s version of our story?

Though hell is an uncomfortable, difficult topic to write about, I join with others in thinking a strong reply to Bell’s view is necessary.  I am convinced that only a Christian hope that is faithful and true to the Word of God is worthy of proclamation, and will bring real and lasting benefit to those who hear it.  It must be a Christian hope that, in line with Scripture, envisions God not only as perfectly loving, but also as consummately holy, and that sees human nature by contrast as desperately flawed and in urgent need of a Savior.

Accordingly in this paper I argue that Christianity has and must derive its ideas about God’s love and holiness, the nature of heaven and hell, and the destiny of mankind, not from what one would personally hope or wish to be, but strictly from the revelation of Scripture, rightly interpreted. While one can certainly sympathize with Bell’s desire that all would be saved by the love of God, our only authority for designating the precise parameters of Christian hope is the revelation of Scripture, not wishful thinking.  However well-intentioned they may be, ultimately Bell’s proposals are irresponsible and even dangerous in that they hold out false hope for unbelievers, and offer a confusing message to believers about what the gospel message is.  Bell sees a God who is never angry towards sin, yet in Scripture we find the good news of forgiveness and healing through Christ juxtaposed against the backdrop of God’s holy wrath against sin, shining all the more brightly against this dark reality.

To better understand and properly respond to Bell’s peculiar brand of inclusivism, we’ll look at the history of thought on hell, including discussion of the major approaches to the afterlife.  Bell is right to say his position is not new, and as we examine its historical precedents, we’ll see also his was always a minority view, not a central stream in the Church, as he claims.  Nevertheless his view does resonate with many today, and we’ll discuss why that may be.

Delving further into his argument, we will find that contrary to Bell, Scripture does not present either hell or heaven as a purgatorial process, nor are there “endless opportunities in an endless amount of time”[1] for postmortem salvation for all people, as Bell envisions. Instead Scripture repeatedly sounds the alarm that a future, literal, consciously-experienced heaven or hell is the destiny of every individual, and that this destiny is based upon choices one makes solely this side of the grave. These choices are therefore of utmost urgency and importance, with irrevocable consequences.

The doctrine of hell cannot be severed from relation to other important doctrines. The nature and significance of hell is intertwined with one’s understanding of such doctrines as revelation, man’s total depravity, and the interplay of God’s perfect attributes of love, holiness and justice, particularly in the work of the Cross. How one thinks about these other doctrines impacts how one will define and delineate hell. Bell’s view on hell suffers from a biblically defective view of revelation, God’s holiness, man’s depravity, and the work of the Cross.

Finally, the traditional doctrine of hell cannot be jettisoned without losing crucial aspects of the true gospel message: its exclusivity, its urgency, its emphasis that an infinitely holy and righteous God is perfectly just in executing punishment against all sin and rebellion against Him, even as He lovingly, mercifully and graciously rescues a multitude of sinners. He did so by sending His own Son to die for sinners, removing God’s wrath against them by suffering the very pains of hell on their behalf. The love of God powerfully triumphs over sin, not, as Bell surmises, because everyone is already saved and hell will at some point be emptied, but because God has accomplished through the finished work of Christ the definite, full and eternal redemption of His people, whom He called to Himself before the foundation of the world.

In the next post in our series on Rob Bell and hell, we’ll do a brief review of the historical background of thought on hell.  This will help us better understand Rob Bell’s alternate take on hell, which isn’t new but finds much common ground with liberal theologians.